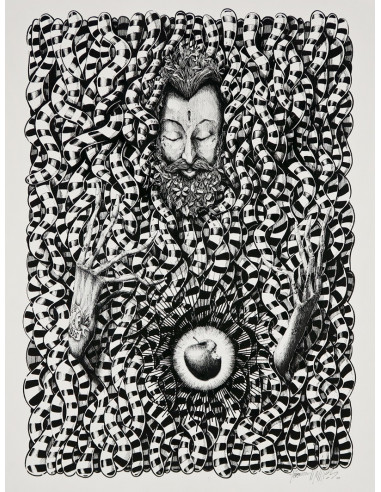 4 hands drawing on paper by Maye and Momies.

Momies, who was born in 1976, has been in the forefront of the graffiti movement since it invaded Montpellier in the 1990s. He fell in love with the graffiti culture and the adrenaline rush and friendships that are so much a part of it. In 1993, he began refining a writing style as Pyre, throwing up his letters quickly and, of course, without authorization. He was one of many to build the local graffiti scene, making it a permanent part of the landscape and marking out its essential sites. Momies and Vania, both equipped with their Interrail passes, traversed Europe again and again, finding inspiration for their art in their encounters with other dedicated street artists. And at this time, Momies was increasingly noticed

for his lettering style: unfettered, impulsive, generously layered, cleverly built up. Yet from this already sophisticated lettering, Momies gradually began to stretch, refine and purify his style, scrambling it up and then radicalizing it in a clearly abstract way. This conscientious work on “modules,” as he called them, burst forth on bigger and bigger outdoor surfaces, often as part of projects stamped POW, while he also began a series on canvas in the calm of his workshop. Unsurprisingly, he feels comfortable wherever he goes and is today regularly invited to work on major projects around the world.

Momies has never betrayed his immoderate taste for lettering, a first love that he still playfully revisits, recapturing the spirit of 1960s comics. And he continues to demonstrate the codes of meticulous graffiti, technically irreproachable and fundamentally malleable.

Maye encountered the graffiti of this first generation straight on, as he grew up in the hip-hop culture and all it encompasses. Born in sun-drenched Sète in 1990, he instinctively turned to drawing as an ideal way to wander in his mind as he sought to express himself. With no particular artistic training but armed with an overflowing imagination and the encouragement of his entourage, he quickly found his own style, showing a delicacy in striking contrast to what we usually see on the walls of that period at the end of the 2000s. Drawing lines that are light and cheerful, Maye produces masterful compositions, cleverly blending fantasy with memories of travels, encounters and an eclectic mix of inspirations.

He brings his elongated characters to life: new b-boys with convoluted postures, sometimes impertinently fashioned as letters and crisscrossed with stunning detail. This is the magic: Maye calls us to attention and awakens in us the capacity to shape our own story and read a painting as we would a book. Whether painting outdoors on the walls of the world or concentrating on longer-lasting canvases at home in Montpellier, Maye continues to provoke interaction with the viewer, the environment,

Harmony is at the heart of Shared Roots, an exhibition that unites these two artists. United as cousins, rooted in the same graffiti culture, and shaped by the warmth of the South, Maye and Momies may

be separated by a generation, but they understand each other and elegantly share the same vision of painting: interaction—of course; the sublimation of the site—certainly; but pleasure above all. They’ve

been invited to several festivals (Grenoble, Toulouse, Nouméa), building a shared aesthetic as each maintains his own style. When the abstract enthusiasms of one merge with the slender silhouettes of the other, the background blends into the foreground, and the disturbing realism of the scenes and details unites with a universe defying the laws of gravity, their shared roots, brilliantly in balance, are revealed to our eyes—with no hierarchy, no beginning or end, no front or back: all is simply evidence

and sincerity. Shared Roots is thus for everyone, enveloping us in its benevolence, in the pure and simple spirit of graffiti culture.